Not every 6-year old would give up their 7th birthday for others. Meet Chase – he did.

When Chase’s mom asked him what he would like to do for his 7th birthday, he said, “Raise money for hungry kids”. 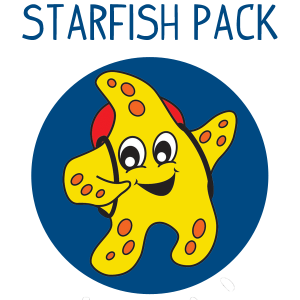 His mom, Eliza Miller, was so proud of her son’s generosity. She got behind his idea wholeheartedly.  Chase’s goal was to raise $50 for Abbotsford Food Bank’s Starfish Pack program by the end of March.  He had $50 in his savings account and figured that was a large amount to ask others to give. How could he ask others to give if he wasn’t going to give as well? So he pledged to match the $50 with his savings. Eliza, inspired by her son, popped a photo up on Facebook to see if any of her friends would be willing to match her son’s request.  She was not prepared for what would happen next.

" How could he ask others to give if he wasn’t going to give as well? So he pledged to match the $50 with his savings." 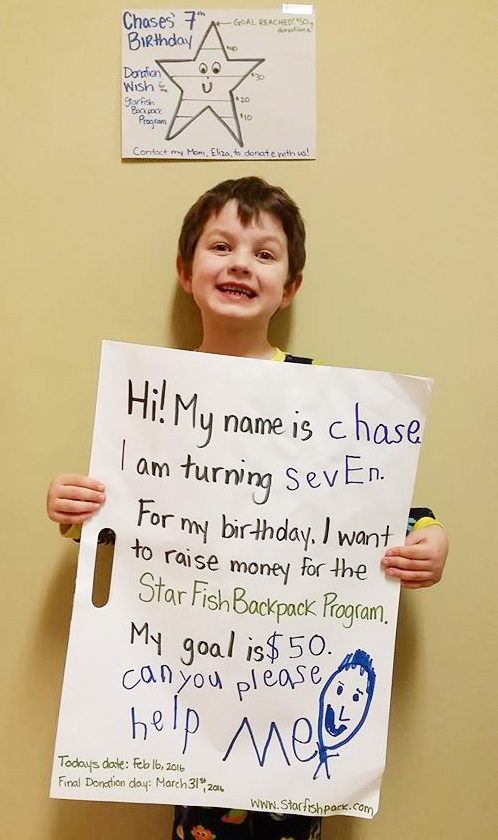 Imagine Chase’s shock and excitement when 48 hours later over $530 had been raised! Now Chase was inspired by the generous community around him.  What else could he do? He upped the ante. The number that popped into his head was 17. That means he wanted to fill 17 backpacks every weekend for a whole year. What was the total they need to raise to do this? Almost $9000.  Nothing seemed impossible now to this almost 7-year-old boy.
The whole community was being inspired by Chase’s enthusiasm.  To raise the needed money, they needed a plan. First, Chase’s mom got right to work with a ‘lemonade stand & bottle drive’. Local businesses got on board and fully stocked the lemonade stand for success.  Then they did an online 24-hour auction. The auction was open to anyone on Facebook and once again, local businesses championed Chase’s cause. By March 29th they had raised almost $7,000. 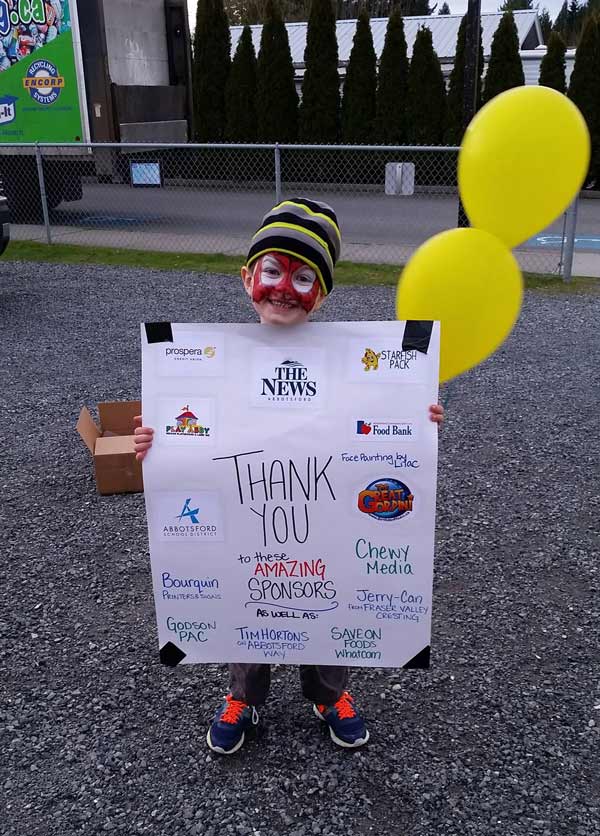 Chase after the Lemonade Stand

Chase is a curious and caring boy. When he found out he could help pack the Starfish backpacks that were going to his school, he jumped at the chance. The day he volunteered he got an up close and personal look at the amazing amount of people working behind the scenes to bring Starfish to 251 children, across 24 schools in Abbotsford.  Chase helped unload the food, break down boxes and, best of all, pack the backpacks for his schoolmates. Once Chase saw all the food that goes into the backpacks he asked his mom, “Can I have one?”. This is a good sign Starfish Packs have desirable food for kids! 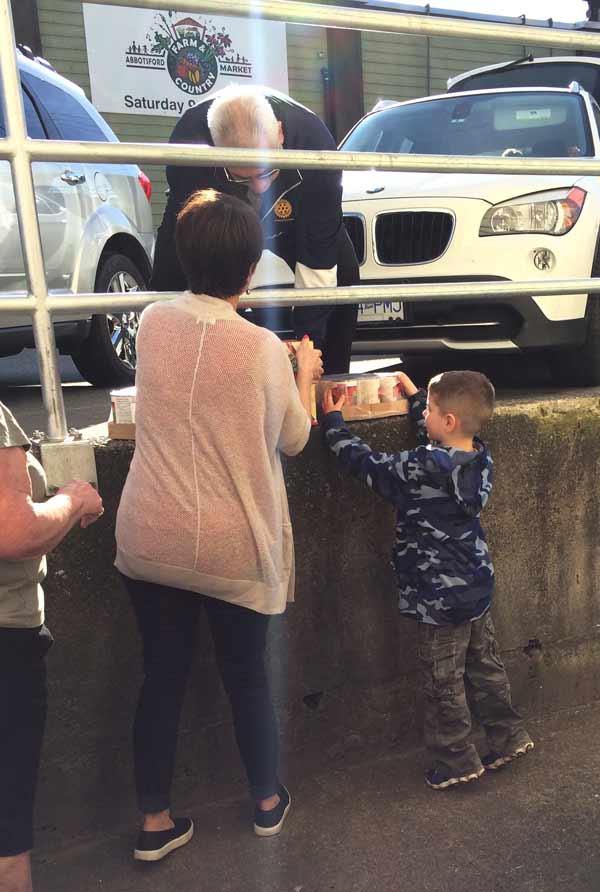 Chase helping unload the food to be sorted. 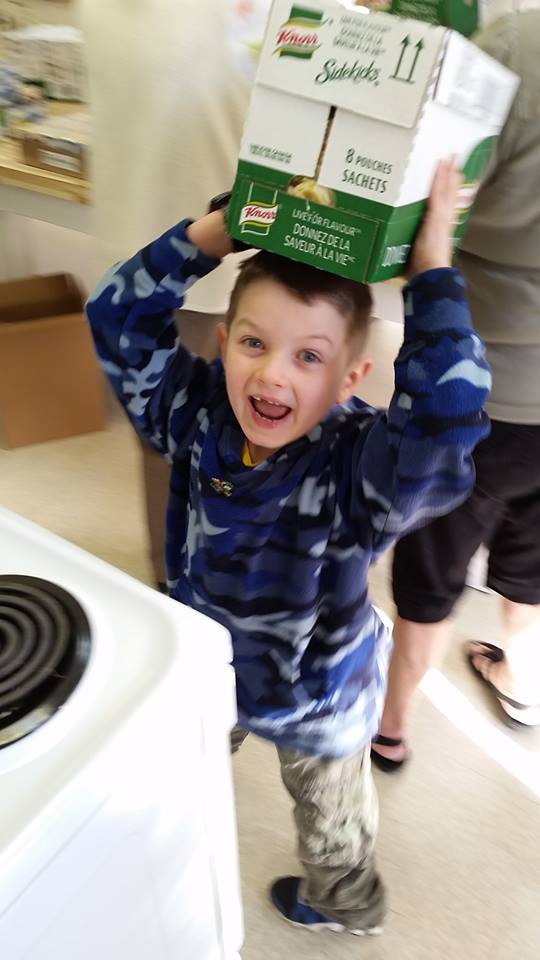 Chase bringing in the food. 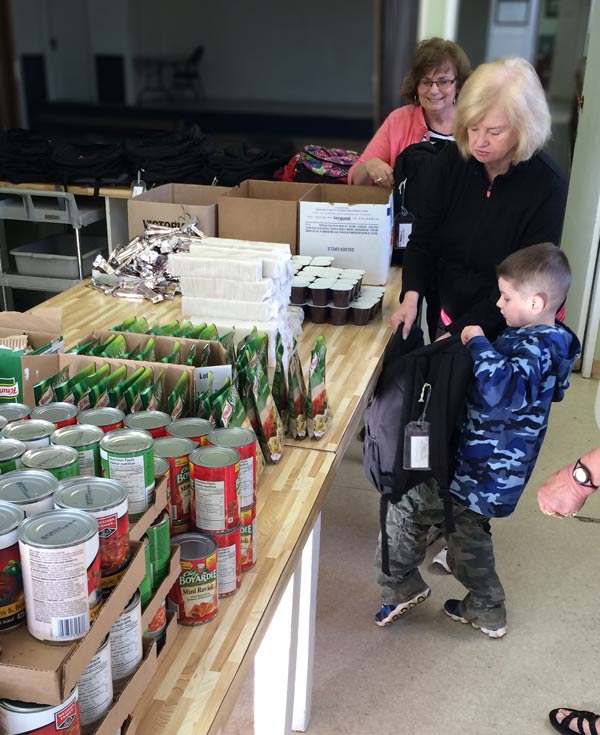 Chase helping fill the backpacks for his school.

Finally every last penny was counted on April 4th.  Chase, his mother and an entourage of family arrived at the Abbotsford Food Bank to present the grand total – $8,206. With this amount of money, Chase filled 15.5 backpacks for a full year.   The Abbotsford Community Services Food Bank was blown away by Chase’s efforts. To recognize him as a Super Kid, he was given an award and an honorary backpack filled with his favorite – chocolate. 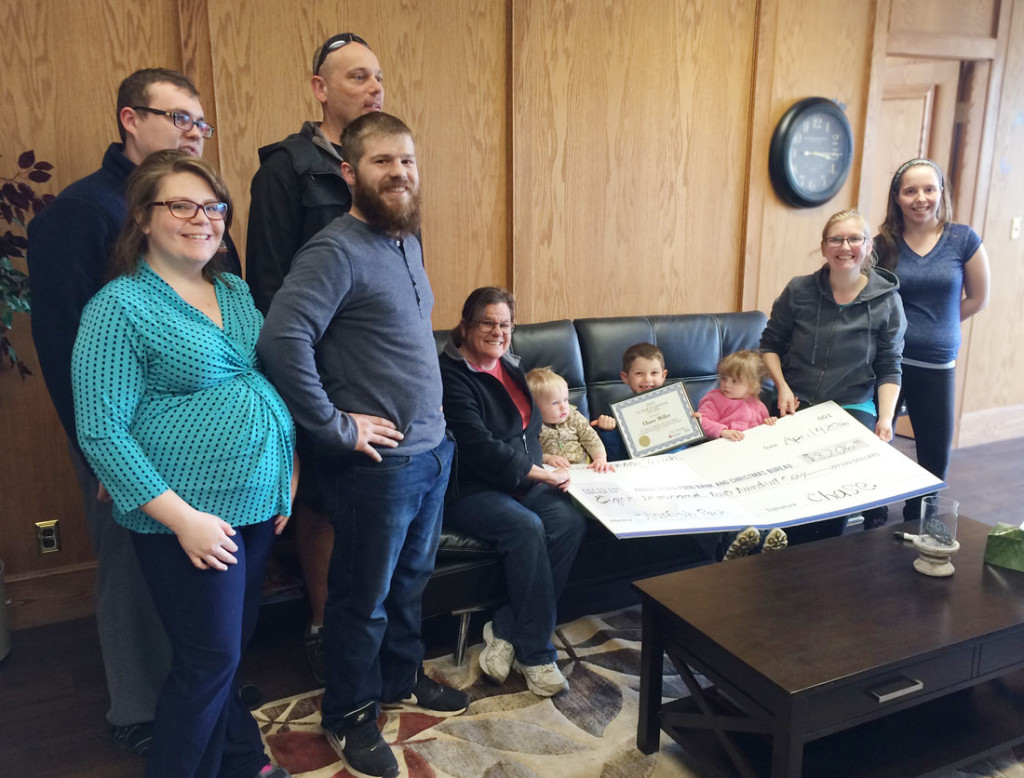 Chase’s entourage was so proud of him!

Not only has Chase raised an amazing amount of money, he did something much greater than money could ever do. Chase has inspired a community with his generous and caring heart. Chase was happy knowing children in his school were being fed every weekend because he decided to give on his birthday.  Now that is something to celebrate.

More info:
$525 fills one backpack for one child in Abbotsford for one year. 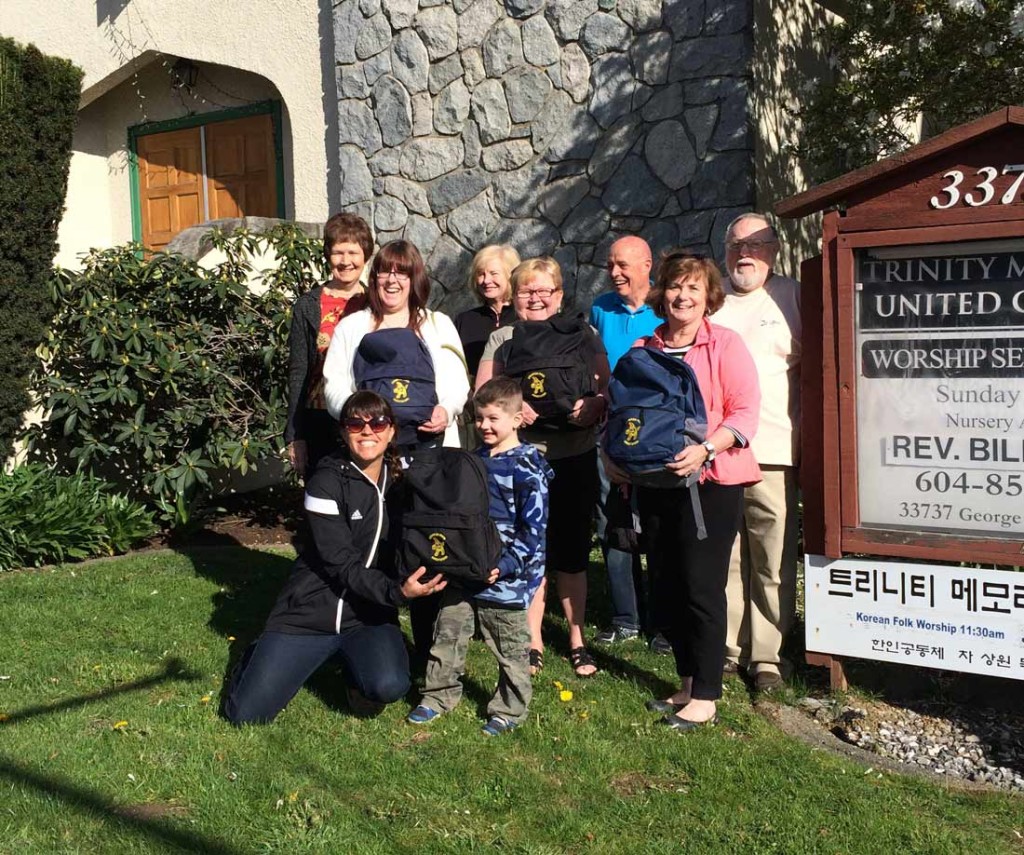 Chase stands with the group of volunteers that pack the backpacks for his school. 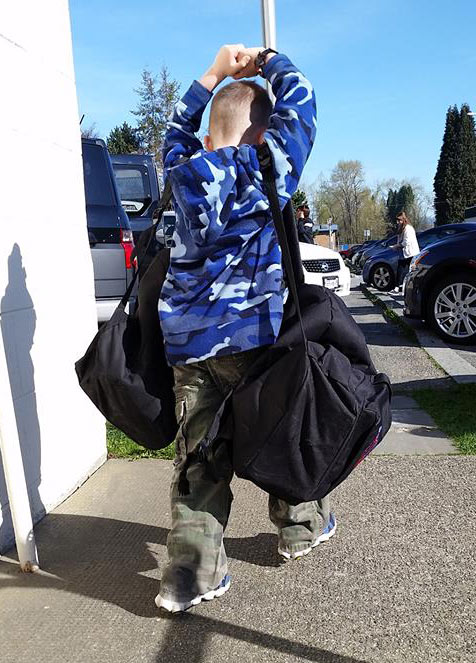 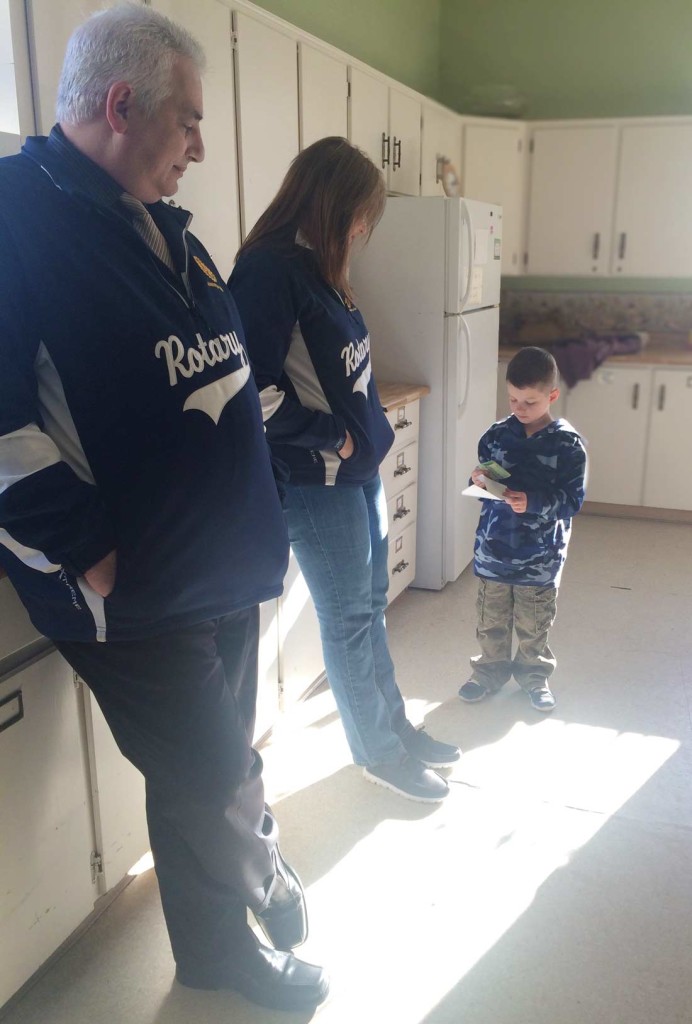 Chase recieves his first pin from Rotary Club of Abbotsford in appreciation of his hard work for the Starfish Pack Program. 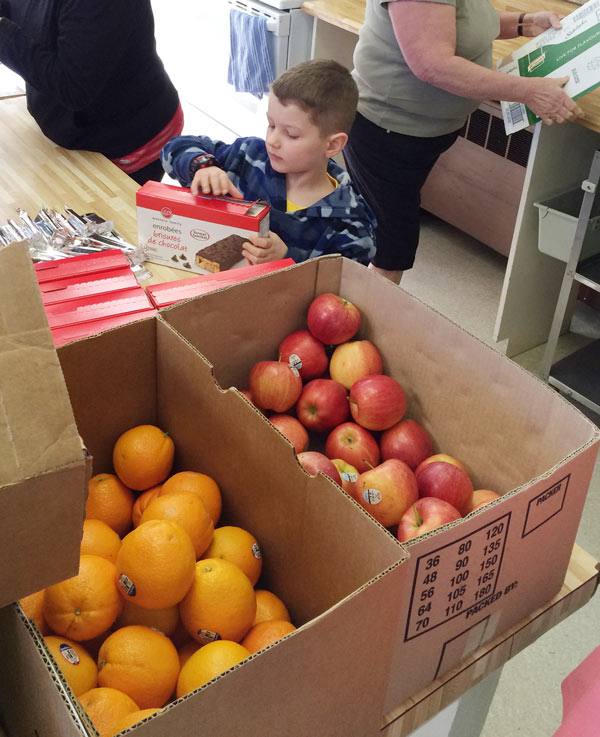 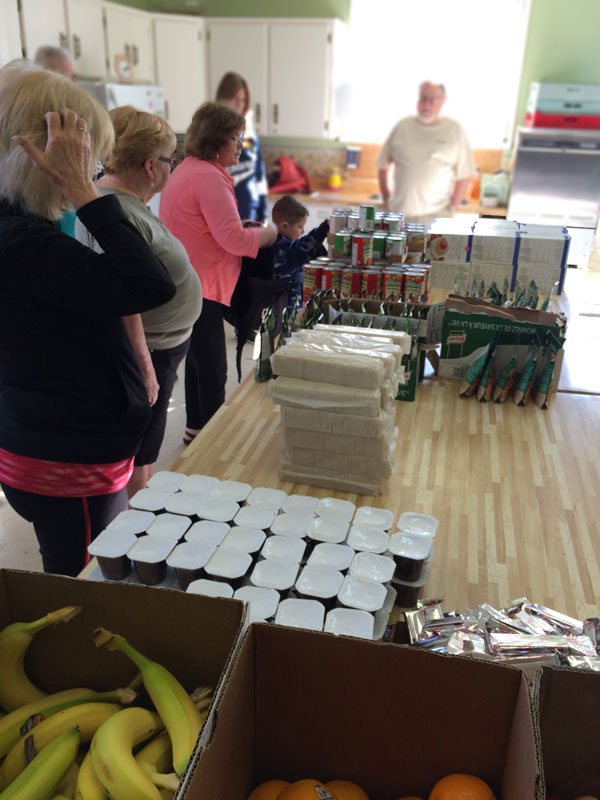 Everyone is ready to sort. Chase gets the run down on all the items that go into a pack. 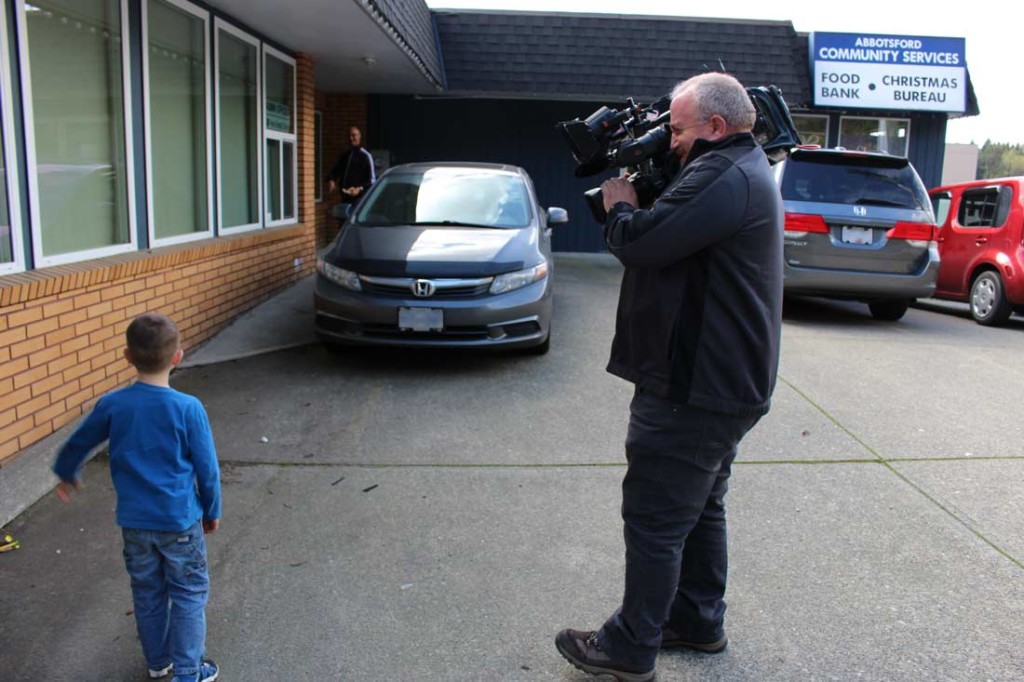 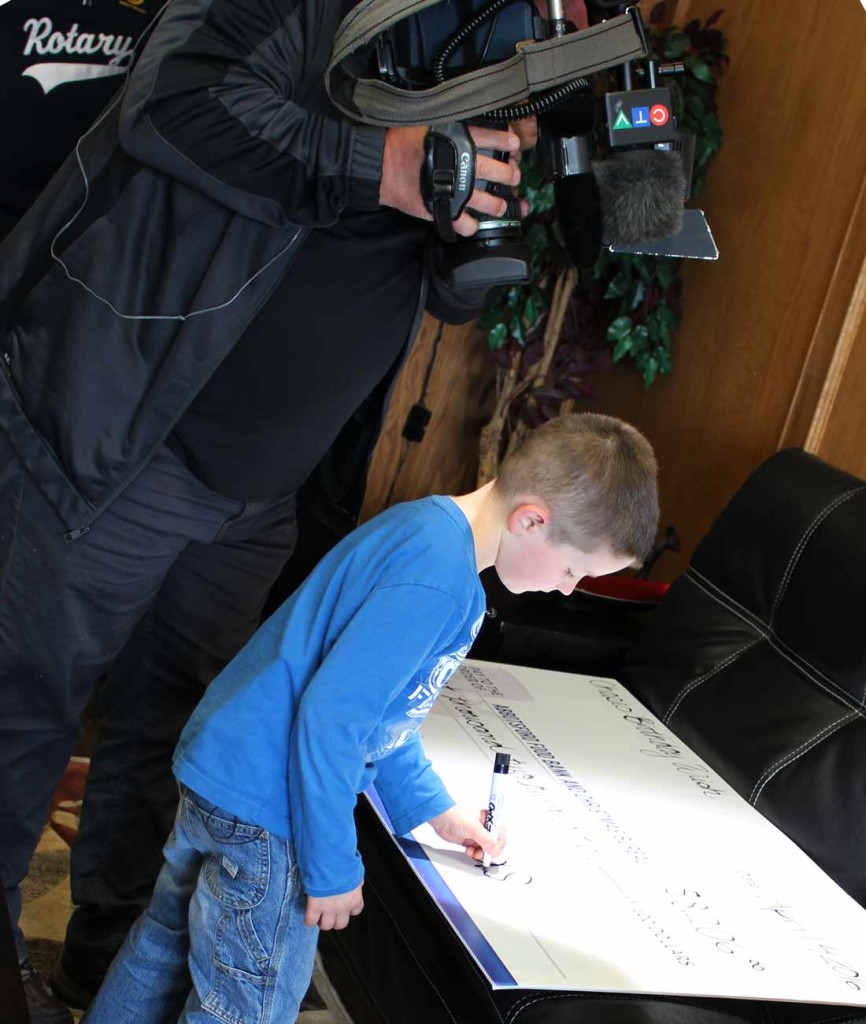 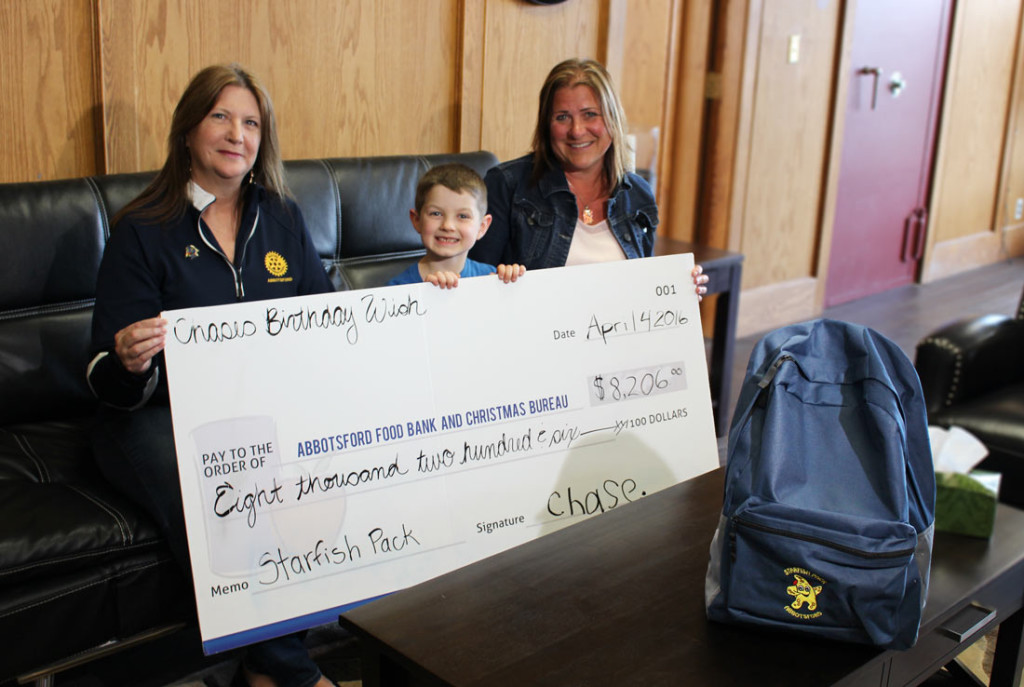 Chase with his school principal and Leslie McConnell, president of Rotary Club of Abbotsford 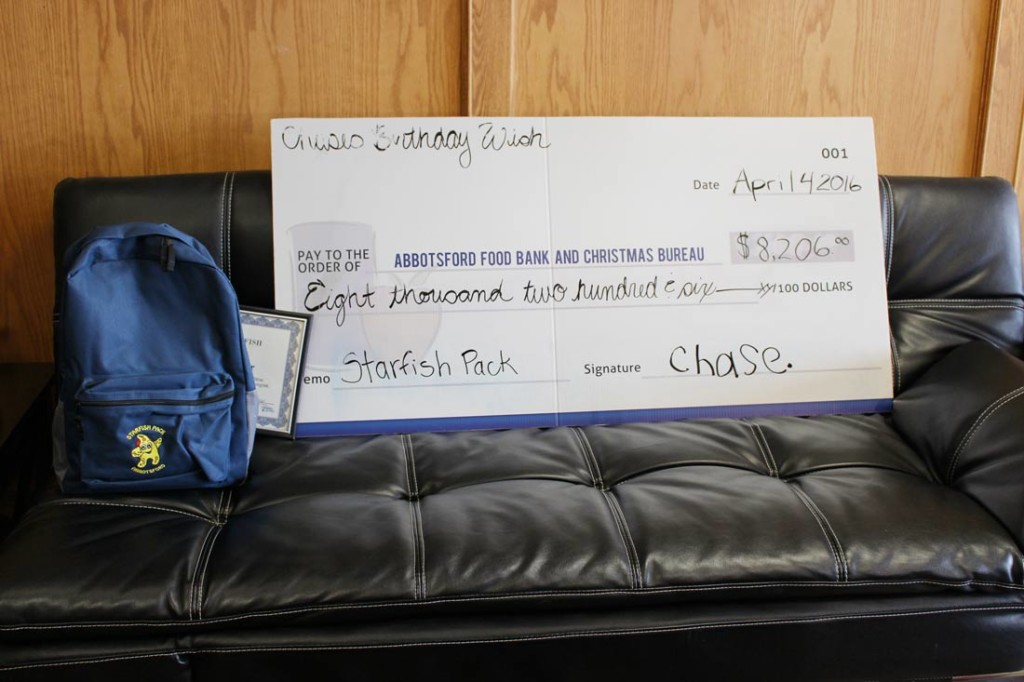 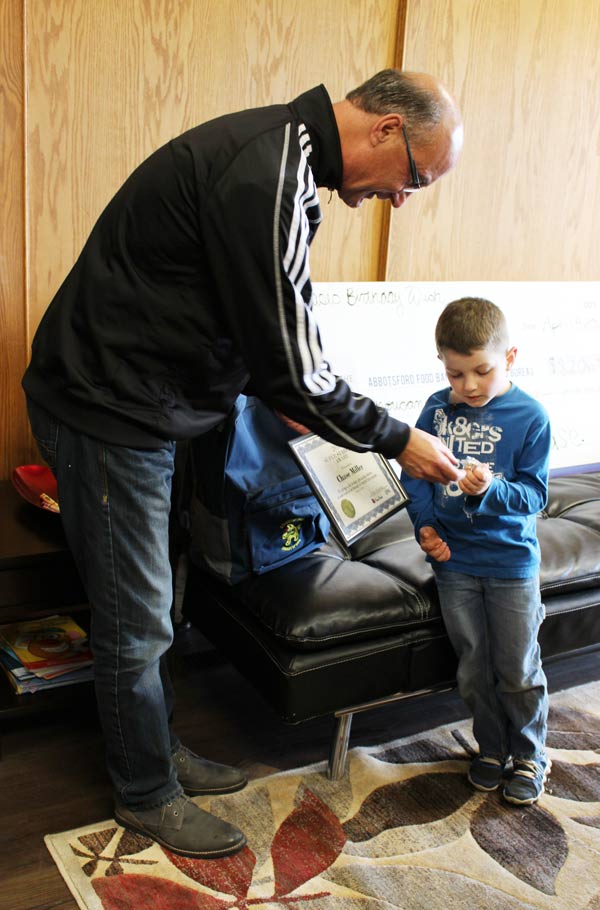 Knowing Chase loves pins. The Abbotsford Community services Food Bank awards chase with another pin and his own backpack full of chocolate!